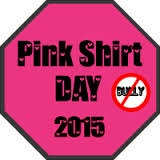 February 25th 2015 is Pink Shirt Day  in support of efforts to Stop Bullying of all kinds. Whether it be in the workplace, schools, home or on the internet. By wearing something pink you are supporting the efforts to STOP bullying of any kind.

Bullying has been around for a long time and tolerated for just as long because too many people couldn't or wouldn't stand up. In 2015 Bullying is happening more rampantly than ever and its never been more important to stand up for those that can't be heard. More and more I keep hearing about people that have been incessantly harassed in person, by email, or on some form of social media. The latter two seeming to give the Bullies a voice that they wouldn't normally have. The courage to hurt behind closed doors. It is long overdue to give those being bullied the Voice and the Courage!

I love it, this year Coast Capital Savings wants to turn the Internet Positive by donating a $1 to Pink Shirt Day  for every time that #PinkItForward is used

3 years ago In Richmond 500 students took part in a flash mob at the Aberdeen Centre. It brought tears to my eyes. I know I'm sappy but it was great to see kids of all ages taking part to help stomp out bullying. Take a peak at their youtube video:

For more information and to see how you can take part, here's a website set up for the day to share your pictures and thoughts. We'd love to hear from you too!

Support anti-bullying by wearing PINK tomorrow! Let's help those without a voice be heard! Let's show them we care!