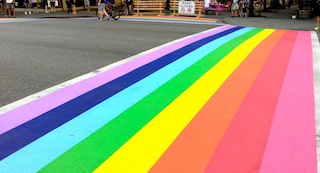 Happy Pride Week Vancouver! How amazing is this...Canada's 1st ever permament rainbow Crosswalk was just unveiled in time for the launch of Pride Week Vancouver yesterday. The rainbow crosswalk is located at Davie and Bute in Vancouver's West end. The crosswalk is a symbol of how far the city of Vancouver has come to being a safe and accepting community! I am sure it will become a place for visitors and locals alike to come and check out!

Vancouver Pride Week has festivities throughout the week and ends with the 35th annual Pride parade in the West end on Sunday starting at noon. The Pride Parade is now the 5th largest in the World expecting well over a half million people to adorn the parade route to watch approximately 150 floats. The parade begins at Robson and Thurlow Streets, heading west to Denman St from there to Pacific Street and Beach avenue then finishing at the Sunset Beach Festival.

For a list of events to check out this week visit Vancity buzz at the following link: Vancity Buzz

Will you be visiting any of the events this week or heading down to the parade?